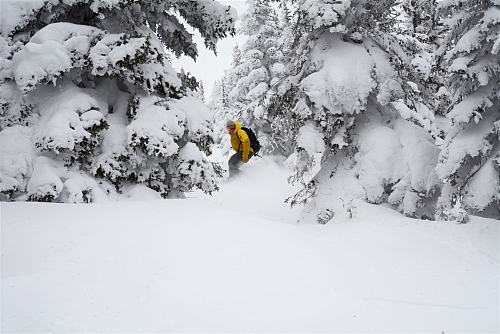 This text is an extract from the Magazine Chic-Chocs, realized by the CLD de la Haute-Gaspésie

Glade runs comparable to those in Western Canada, white birch forests just as beautiful as those in Japan, and yurts as cozy and warm as those in Russia: clearly, La Matanie holds its own among other world destinations.

True gateway to the Chic-Chocs, La Matanie is rich in stunning natural beauty and wildlife. According to outdoor enthusiast Mike Gagnon, one of the region’s charms lies in the beauty of its glade runs: “I have travelled a lot, and, believe me, the most beautiful glade runs are here. On Mont-Blanc and Mont-Paul, the natural terrain and clearance between the trees provides incredible flow for off-piste skiing.” Not to mention the scrubland on the eastern face of Mont-Blanc that offers never-ending powder runs. A perpetual adrenaline rush!

Start off your journey of discovering the accessible and spectacular Chic-Chocs in La Matanie. Safe, snow-covered paths offer stunning vistas of the mountains and sea. Did you know that the vertiginous Mont Nicol-Albert is the only mountain in Quebec that meets the standards of the International Ski Federation for the hosting of winter Olympic Games? Not bad, eh? To contemplate this breathtaking landscape, take the Trans-Québec 5 provincial snowmobile trail and the 595 regional trail near Willy’s hill, cross the Pineault bridge.

Meanwhile, on Mont-Castor, skimo is gaining popularity. “Ski mountaineering is a bit like off-piste skiing, but the ascent and descent are faster.” Mont-Castor even offers you the opportunity to experience night skiing: “After a few runs by headlamp, people retreat to the chalet to enjoy a good beer. There’s no better way to end a day spent outdoors!”

For me, winter is delightful!

Imagine yourself in a land surrounded by endless fields of white splendour, where mature forests and vast alpine meadows meet. Welcome to La Matanie, a powder skiing paradise!

When Jean-Philippe first entered the Réserve faunique de Matane to ski, he felt like he was on another planet—literally: “That day, with Vertigo Adventures, I discovered Mont-Blanc’s vast virgin expanse and snow like I’d never seen before! I craved adventure and dizzying descents but also peace and solitude. My needs were quenched!

And there is great news for backcountry ski enthusiasts, as Vertigo Adventures invites you to explore a brand new ski area in the ChicChocs in 2019: Mont-Paul. “This mountain offers vertical drops of 500 metres, which are rare in Quebec. You feel like the mountain is entirely covered in forest until you enter it. At the end of the day, skiers sleep in a remote yurt, isolated from the rest of the world. The experience is incredible!”