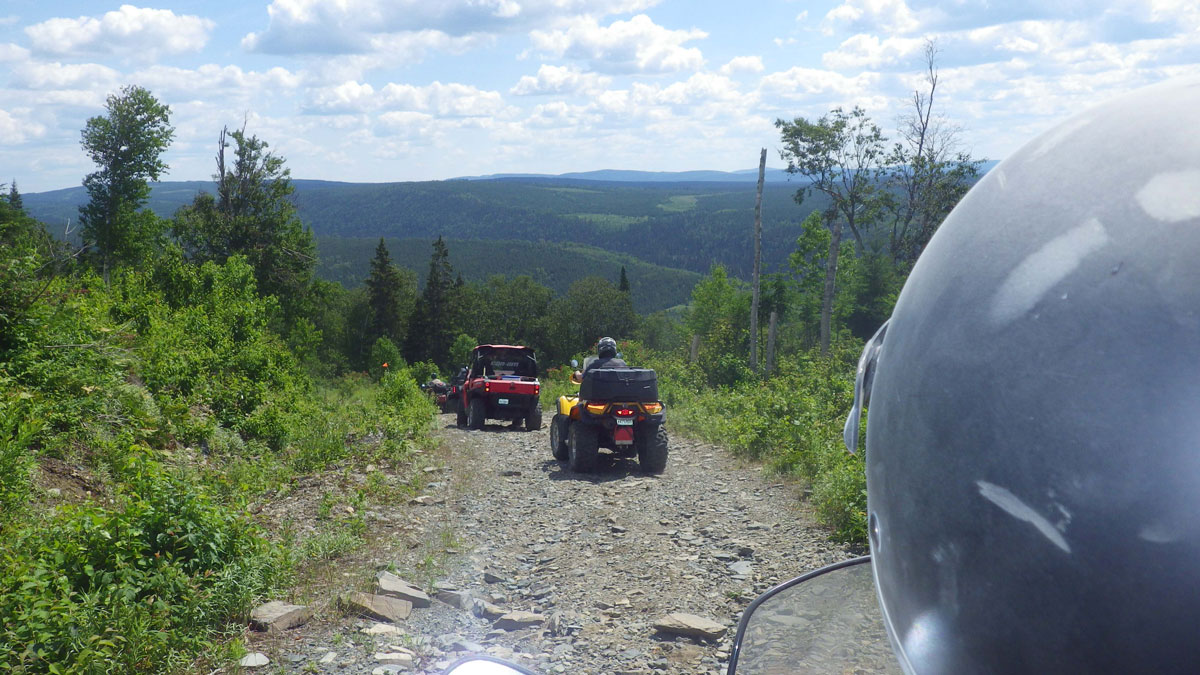 Managed and maintained by the Club Quad de La Matanie in collaboration with the Club Moto Aventure Chic-Chocs, our ATV trails welcome enthusiasts of enduro and dual-purpose off-road motorcycles. Nearly 300 kilometers of federated trails are spread over the territory of La Matanie allowing you to discover the beauty of our forests, to ride along St. Lawrence river, to explore our wind farms and to climb our mountains.

With the largest number of moose per square kilometer in Quebec, the Matane Wildlife Reserve covers an area of 1,275 km2. It is crossed from south to north by trail 807, which passes by the Étang-à-la-truite, a magnificent sector for an excursion in the heart of the Chic-Chocs mountains! Note that during the hunting season, only the trail that crosses the Matane Wildlife Reserve, between Saint-Jean-Cherbourg and Carleton, is closed to ATV.

For the past 10 years, every summer, the event Aventure MTCTAN takes place in La Matanie : an organized 3-day trip where close to 150 off-road motorcycle enthusiasts gather to explore 800 km of trails with cool or hot technical levels. Quite an adventure in the Gaspesian jungle! 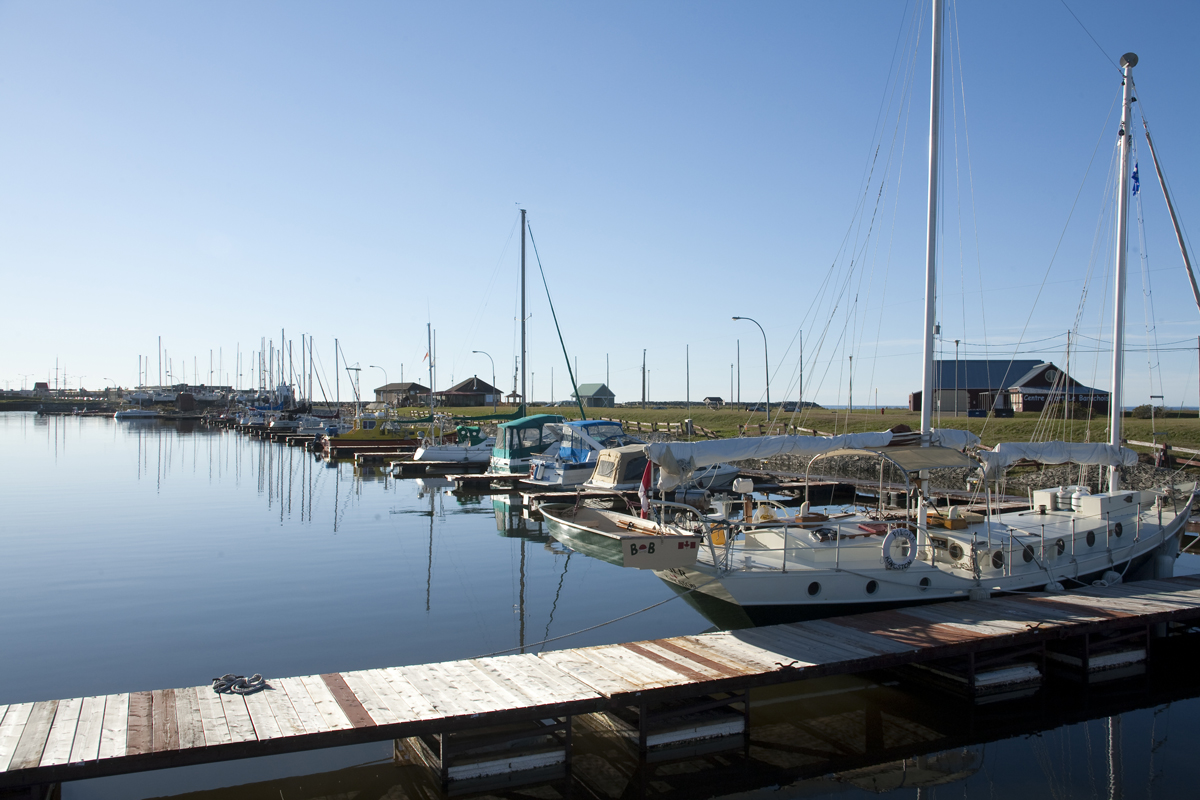 Whether you are a sailor, a boat enthusiast or simply curious, a stop at the Matane marina is a must. Close to downtown and offering drinks inside the little building at the marina, the Capitainerie Delphis Bélanger is the ideal place to refuel and meet interesting people during your stopover in the region. The many sailboats in the marina will impress the young and old alike. On site, "Le Knorr", a replica of a Viking ship will welcome you. How to explain its surprising presence here? This is an excellent question to ask the members or employees of the marina.

If you are coming in from offshore, head for the red and white buoy marked "MATAN" (48º51.639'N; 67º32.357'W). Communicate by VHF with the marina staff, on channel 68, to indicate your arrival and the size of your boat so that they can assign you a berth. The Club de Yacht de Matane offers several services to sailors: drinkable water tank refill, 25A and 30A electricity on the pontoons, gasoline and diesel, service module including five private shower rooms, toilet and sink, laundry room, launching ramp, minor repair shop, dry dock and free long-term parking.

Where can I find a dock or a boat ramp in the region of Matane? 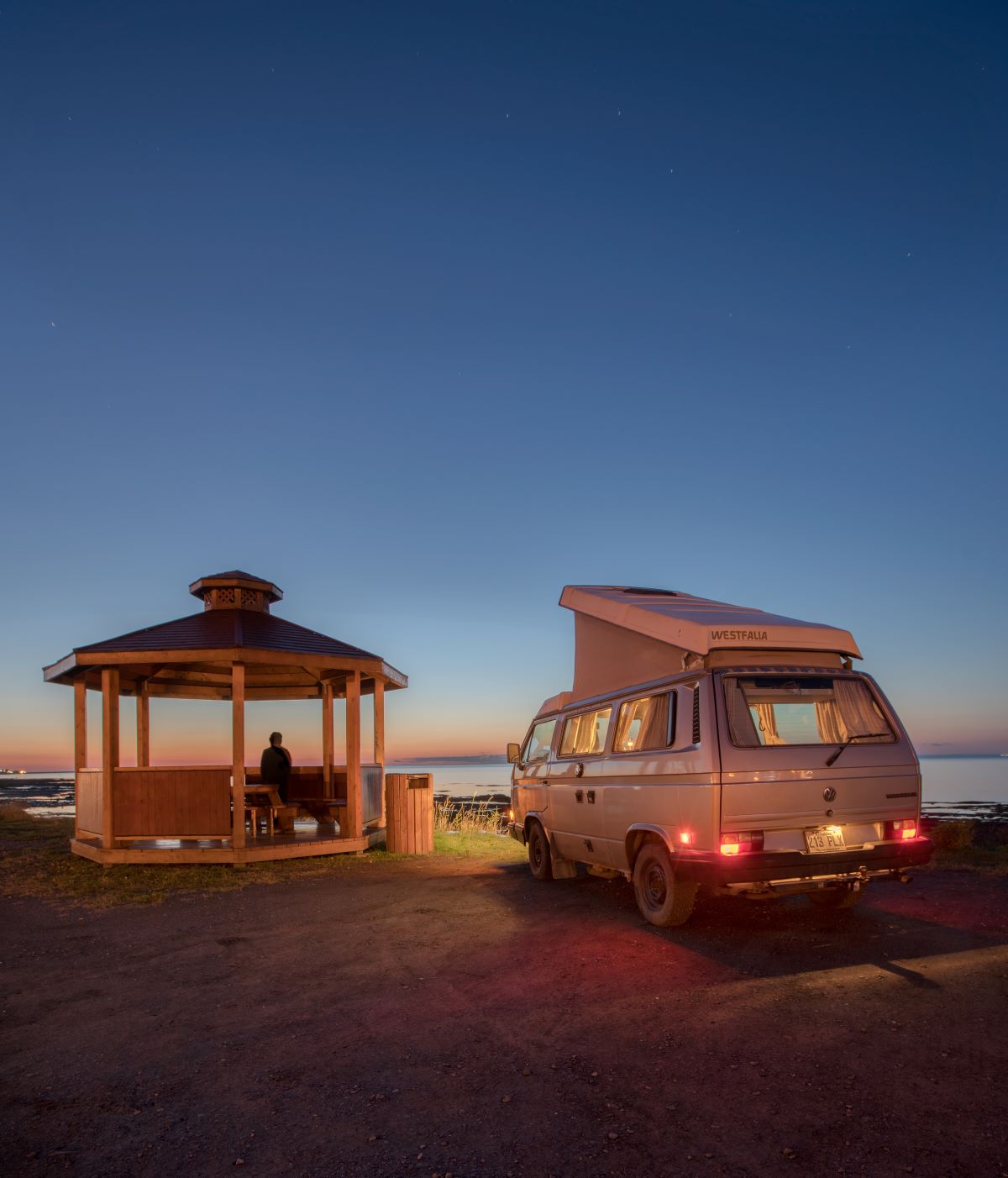 Where to sleep, eat and dump your used water during a RV trip in the region of Matane? Here is some practical information and advices to help you plan your vacation in La Matanie.

Where to stop to sleep?

Most municipalities in La Matanie have regulations prohibiting overnight parking in public places. In order to avoid fines and to sleep safely, we invite you to use the services provided for this purpose.

Boondocking with your RV

In addition to the certified campsites offered at several locations on our territory, some municipalities in our region have set up spaces specifically for self-sufficient campers. Signs are always disposed on sites to clearly identify where overnight parking is permitted. Contact the Tourist Information Office of Matane to find out where these sites are located and to obtain information on the regulations to follow.

Picnic tables, sanitary facilities, drinkable water and playgrounds are among the services that can be found at some rest stops. However, in the province of Quebec, it is forbidden to be parked in a rest stop for a period of more than 4 hours or to spend the night there. Also note that most rest stops arejust open during summer, therefore open from mid-May to mid-October. Visit quebec511.info for more information. Terego - A way to discover a place throught agritourism

Terego is a network of free overnight parking spaces at local hosts in Canada who warmly welcome travelers with RVs (recreational vehicles: motor homes, caravans, campers, minivans). To have access to the network, the traveler only needs to become a member of Terego with either a yearly subscription or a 3 consecutive days passport. No other fees will be charged by the network's hosts to stay overnight. To make a reservation, first choose your RV parks by browsing the online map or searching by region, date, host type or other search criteria. Then reserve your parking with one click! The host is immediately notified by email of your visit. In La Matanie, we are fortunate to have a host on our territory, the smokehouse Fumoir M. Chassé. Discover the good products of this producer by reserving this location on the Terego platform!

Looking for a station to drain your RV? Need to fill your propane tank? Your drinkable water tank is almost dry? You need a repairman for your van? Find all the services offered to RV or van owners on this map. Click on the icons for more details.

Leave no trace: Tips for a more responsible travel

In La Matanie, even if there are large open spaces of nature that do not seem to be occupied, the place you want to park always belongs to an individual, a business, a municipality or another entity. It may also be a protected area.

Here are some behaviours to adopt and be inspired by when traveling: 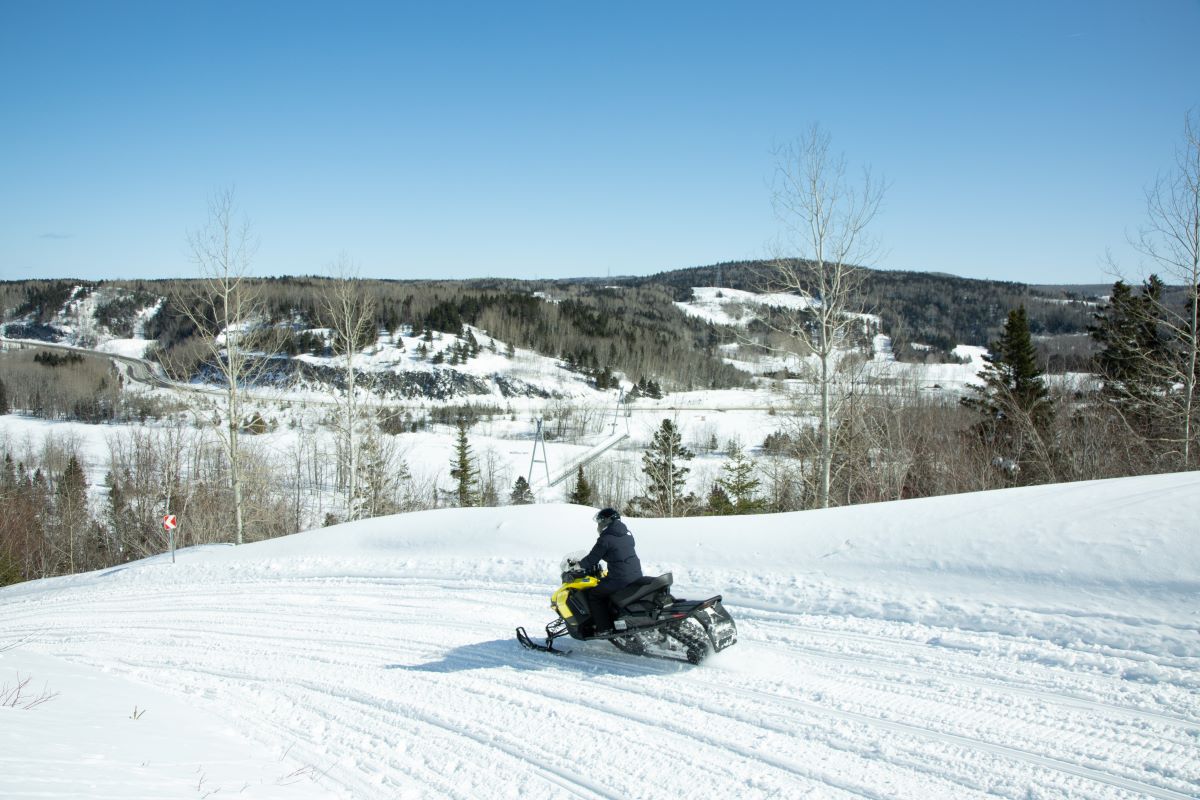 Known for its exceptional snowfall, La Matanie offers unforgettable experiences to snowmobile enthusiasts. Discover nearly 350 km of trails maintained by the Club des amoureux de la motoneige de Matane and the priceless beauty of the river and mountain landscapes. In the region of Matane, you have the beauty of the St. Lawrence river, but you have also the beginning of the Chic-Chocs mountain range. Our snowmobile trails extends from Saint-Damase in La Matapédia, south of Baie-des-Sables, to the Relais de La Cache located in the heart of the Chic-Chocs. This is a huge territory to cover! A superb playground awaits you.

Before you leave, here are a few things to do:

Good practices to adopt when snowmobiling:

To learn more about the laws and regulations, click here.

A large network of trails means many snowmobile clubhouses and shelters where you can take a break, get warm and have a bite to eat. Plan a few stops during your tour:

Moderation tastes better! Drinking and driving don't go together, and that goes for snowmobiling too. Remember that snowmobiling is an off-road activity and takes place in a natural, unpredictable and uncontrollable environment. If you drink at a snowmobile clubhouse or a shelter, have a second sober driver who can take over and drive your snowmobile. Zero Alcohol - Your Smart Choice!

Thanks to its geographical location, Matane is the perfect base camp to take off in the morning and choose one of the many routes available to you. As the gateway to the Chic-Chocs, you will find yourself in a true mountain playground where snow and nature take center stage! In addition, several hotels in our region offer snowmobilers the possibility of leaving their car in a long-term parking lot so that they can make a trip of more than one night before returning to Matane. Be inspired by our snowmobile routes that crisscross the Gaspé Peninsula and whose departure points are all located in Matane.

What should I do if I come across an animal while snowmobiling?

By adopting these good habits, you contribute to responsible snowmobiling by reducing its impact on wildlife and to the positive impact of this important activity, particularly for the tourism industry. 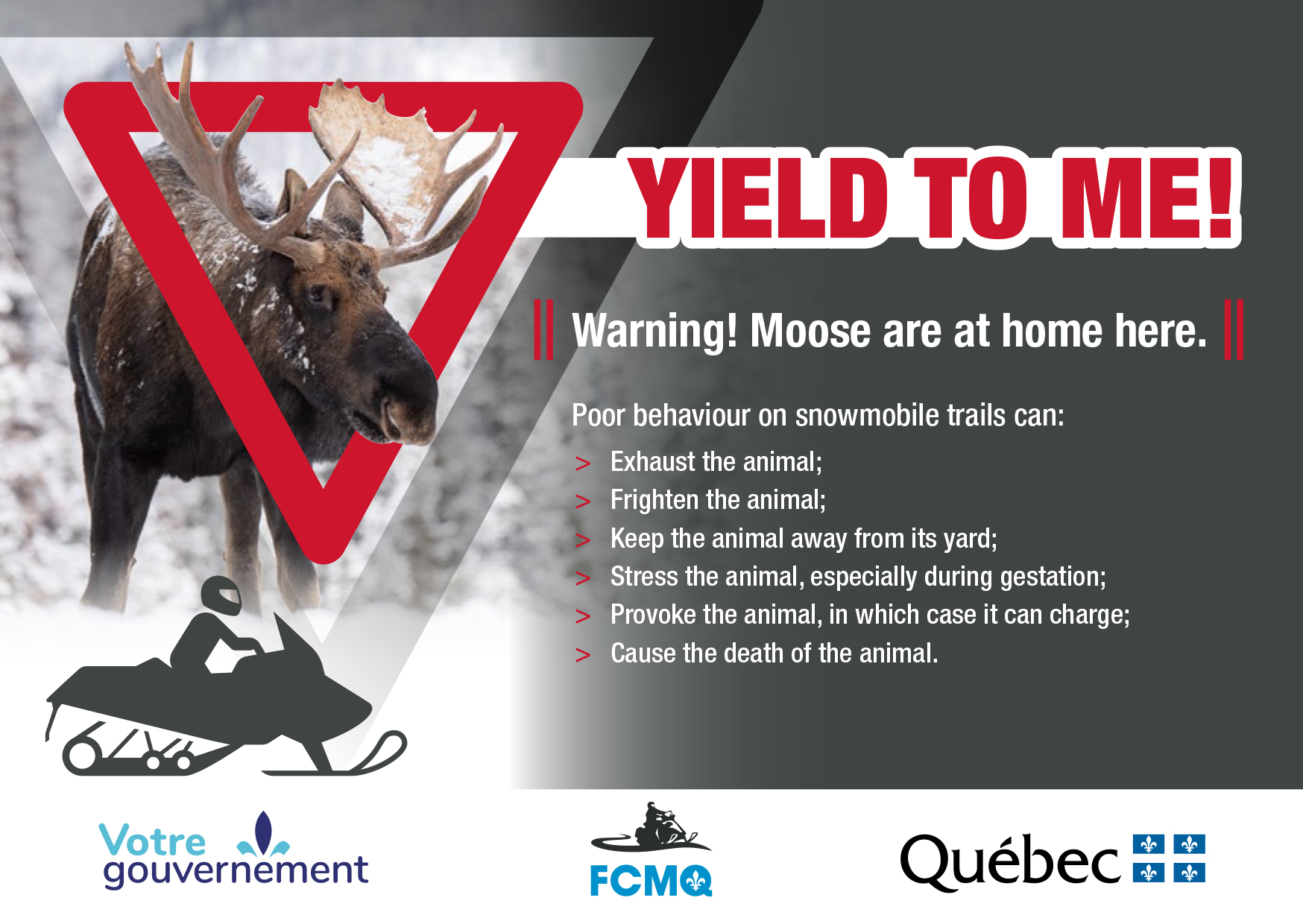 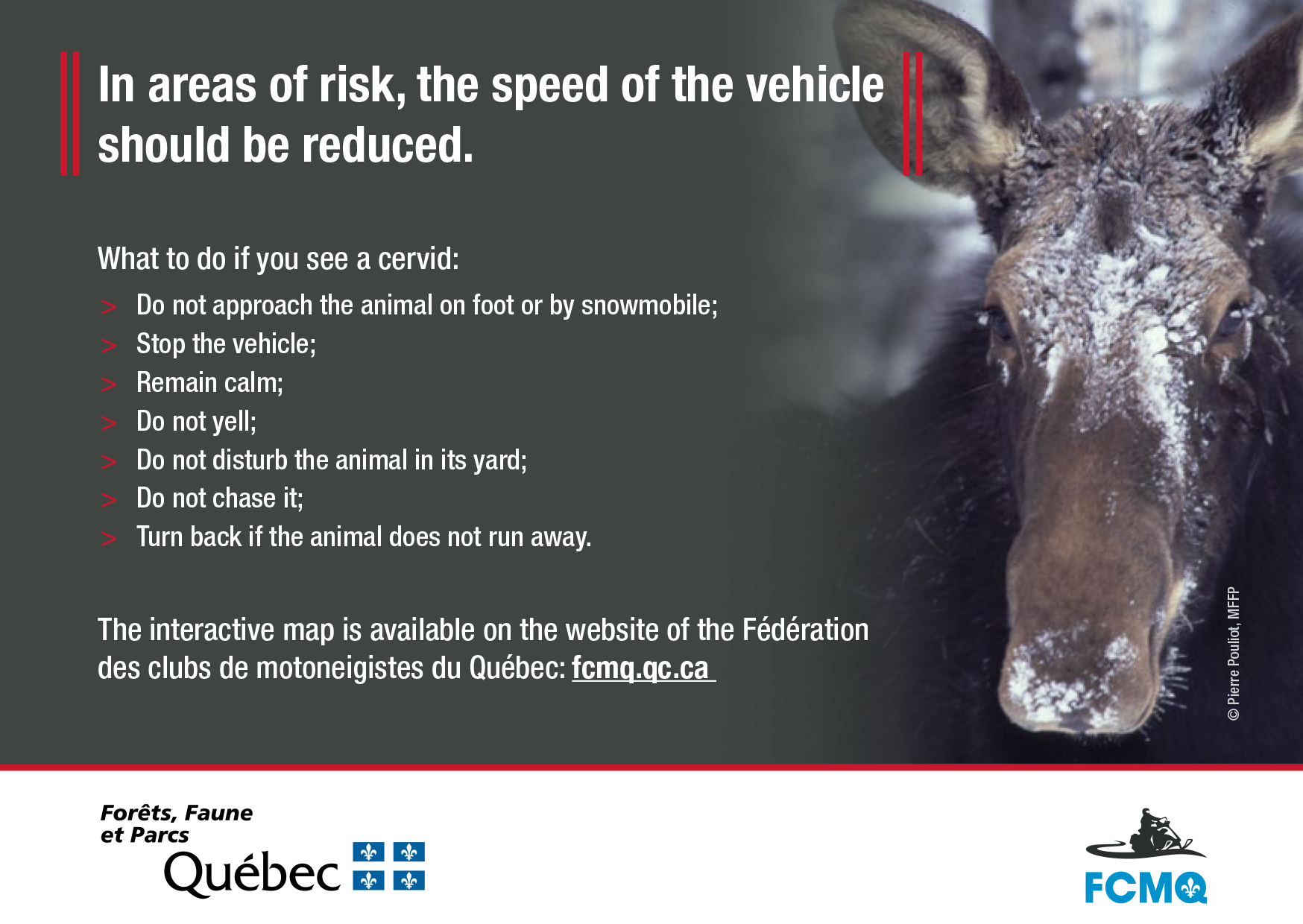